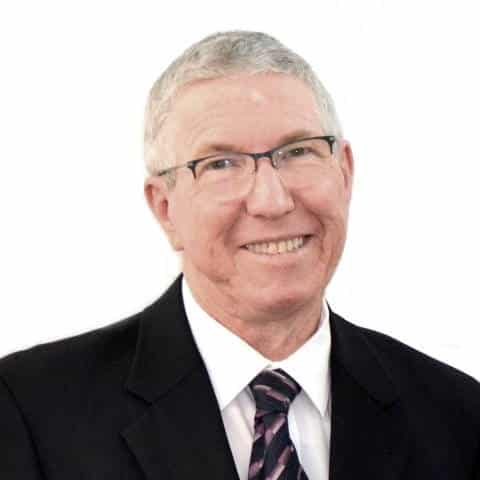 He received his Bachelor of Mechanical Engineering degree in 1972, with First Class Honours and The University Medal. He completed a Master of Engineering Science degree in 1975, and the Ph.D degree in 1977, all from the University of Queensland. His postgraduate research interests lay with the instrumentation of two-phase gas-liquid flows and with the use of hot-wire anemometry in the study of non-isothermal turbulent fluid flows, the technology which laid down the experimental benchmarking results for computerised computational fluid dynamic software which evolved in the 1970’s and 1980’s.

In 1977 he joined the Queensland Electricity Commission as a member of their Scientific Services group, where he performed consulting duties associated with coal-fired power stations, and later joined the new project planning section with responsibilities in the measurement and specification of coal quality for power station design.

He took up the position of project engineer on a prototype fuel and emission-saving hybrid gasoline-electric vehicle transmission in 1979. He led the project from the initial simulations through design, mechanical and electrical construction, preparation of control software to the final stage of road testing and public demonstration. He received the SN RODDA Medal from the Society of Automotive Engineers Australasia (named after the 1st President of SAEA [1927-33]) for engineering design of this world-first prototype continuously variable ratio transmission system with the flywheel and battery energy storage in 1982. In that same year, the vehicle was demonstrated at the XIX International FISITA World Congress (Fėdėration Internationale des Sociėtės d’Ingėnieurs des Techniques de l’Automobile) held in Melbourne, Australia. Many novel features, such as brake energy regeneration, power flow control via a computer, and a rotary computerised mode controller (similar to iDrive) were demonstrated. Some fifteen years later, the Toyota Prius, the world’s first mass-manufactured hybrid vehicle, went on sale in Japan; and today, many vehicles incorporate similar features first revealed in Australia in 1982, including hybrid drive.

He later managed an entrepreneurial engineering group involved with the research and development of regenerative braking and microprocessor-controlled power transmission systems for a range of vehicles, as well as demonstration projects which required innovative machine design techniques. A major project was the demonstration of a viable hydrostatic regenerative braking system for a public transport bus operated by the City of Brisbane, the capital city of Queensland with a surrounding population of over 3 million people.

He was appointed Senior Lecturer in Mechanical Engineering at the University of Queensland, Brisbane, Australia from 1986 until mid-1993. His research interests included advanced robotic machine systems with applications in autonomous vehicle guidance, mining machinery, agriculture and space exploration.

In addition to design, dynamics, manufacturing and power transmission subjects, he initiated and lectured in Entrepreneurial Business Management – a course in the preparation of a business plan including marketing, financial and patent strategies for product commercialisation.

He has achieved an extensive original publication record of 42 papers in International journals and at Engineering conferences.

He has travelled extensively overseas to work, to lecture, and to visit research and manufacturing facilities principally in the USA, Japan, UK and NZ. This began in 1972 with a tour of industrial and cultural Japan sponsored by the Mitsui Company, as a selected participant in the current Mitsui Educational Foundation (MEF) Program, which began in 1971. In 1985 he travelled worldwide to negotiate research and development contracts for the University of Queensland, and in 1996 to the USA for Bankers Trust Australia.

For two months in 1988, he worked at the Robotics Division in the Mechanical Engineering Laboratory, Ministry of International Trade and Industry, Tsukuba, Japan; and for six months taught and researched at the leading-edge of mechanical design as a visiting professor in the Systems and Design Division, Mechanical Engineering Department, of the foremost private University in the United States of America, the Massachusetts Institute of Technology, Boston, USA.

A Division of Gilmore Engineers Pty Ltd, named e3k (Engineering 3000) specialises in Industrial Research and Development, particularly New Product Design, Development and Commercialisation. This activity requires a broad knowledge of Engineering, from which ideas and fresh approaches to problem-solving can be drawn. Complete products which satisfy an identified market and consumer demand are created from initial concepts or partially developed devices. This requires a highly creative and experienced approach, together with cross-fertilisation of ideas from other disciplines to enable them to be world competitive and suitable for export. A complete idea-generation, design, prototype development and testing service is provided. Commercialisation and manufacture of the product are considered constantly with assistance being given in protecting Intellectual Property, conducting market research, liaison with regulatory authorities, and importantly interacting with sources of finance.  The Division also conducts Computer Simulation (including Computational Fluid Dynamics) and Project Engineering.

Well over 1,000 consulting assignments for industry and the service sector have been undertaken by e3k since 1979. Tasks in the specialty area of industrial research and development have ranged from the successful conceptual development and commercialisation of new products for mass production manufacturers, through assessment and modification of major equipment installations, to the design of specialist machinery.

E3k has been the recipient of 6 Engineering Excellence Awards from Engineers Australia. E3k was a National Winner in 2012, as well as taking 3 Awards in the Newcastle Division, New South Wales, including the GHD Overall Winner, and the UGL Innovation in Sustainable Engineering Award for engineering design and testing of the SeaUrchin Marine Power Generator.  E3k received a High Commendation in 2001 and was a finalist in 2010 in the Queensland Division Awards with projects sponsored by the Queensland Academy of Sport and Leighton Contractors Pty Ltd respectively.

In February 2014, Atlantis Resources Limited, a company grown from the technology developed by e3k in the years 2000 to 2004, was admitted to trade on the London Stock Exchange.  The world-patented technology part-owned by investment bank Morgan Stanley since 2007, relates to underwater tidal renewable power generation turbines. This project represented an important early contribution by Australia to the introduction of carbon dioxide-free, renewable electric power generation. Atlantis Resources, which now trades as SIMEC Atlantis Energy, is a vertically integrated turbine supplier and project owner. Assets include Meygen, a 269 turbine, 400MW underwater tidal project in the Pentland Firth, North of Scotland, which was partly funded by The Crown Estate and Scottish and the United Kingdom Governments.

In 2013, the Internationally trademarked medical device named “Agilitas” which was wholly developed by e3k over five years, was launched for commercial sale by Bright Devices Pty Ltd, part of the Bright Devices Group.  It is a “smart” visual cueing device designed to assist persons suffering primarily from ‘Freeze of Gait’ (FOG) associated with Parkinson’s Disease.  Approximately 32 million people have been diagnosed with Parkinson’s Disease worldwide, and of those, approximately 10 Million suffer from FOG.   An Australian Patent was awarded in 2012 and a US Patent in 2019.

In 2010, Gilmore Engineers received an Australian International “Design Award” from Good Design Australia, in the Business and Technology Category, for their contribution to the development of the FLAT hydraulic stabilising mechanism for use on any item with legs, skids or footings.  The product is now available for sale through outlets worldwide.

In 2008, the mechanical fastening system was known as “Joinlox”, to which e3k had contributed during development, won “Invention of the Year” on the ABC Television “New Inventors” program.  It is now commercially available from Joinlox Pty Ltd, supported by Xstrata Technology who signed a global licensing agreement in 2010.

Duncan Gilmore is named as an Inventor on over 30 Patents worldwide, from 7 patent technology families.

Over 1,500 major reports of expert engineering evidence have been prepared for the legal profession of Australia since 1984. This evidence has ranged from detailed failure analysis of major industrial/equipment  incidents (cranes, aviation, marine), through patent and copyright actions, to detailed forensic motor vehicle accident analysis and personal injury. Personal injury reports particularly include ergonomic analysis and an assessment of the system of work. Traumatic injury caused in industrial workplaces is an area of specialty. Dr Duncan Gilmore appears regularly in the Federal, Supreme and District Courts as an Expert Witness, and has acted as a review arbitrator.  Recent major matters include a mining dragline boom collapse, severe road accidents, Robinson R22 mustering helicopter incidents, industrial and consumer equipment injuries, patent actions and an expert assisting the Coroner in the Gold Coast Dreamworld Thunder River Rapid Ride inquest.

Strategic assistance and management level advice based on personal experience is given to organisations wishing to take a product to market, or a product to a new market. In particular, in-depth experience exists in negotiating joint ventures leading to International business. This expertise has been accumulated in companies and projects with which Duncan Gilmore maintains an equity interest or is a Director, and through retainer ships and interactions with major investment banks since 1993.

Duncan Gilmore maintains a wide list of associated consultants and colleagues in many fields within Australia and internationally to enable specialist teams to be assembled and to provide the personal networking necessary to create successful technology-based businesses. His biography was included in the Marquis Who’s Who in the World and Who’s Who in Science and Engineering, and the Reed Publication Australian Men and Women of Science, Engineering and Technology.